The times have changed

I remember my first rebreather dive, back in 2008 on AP Inspiration. As an experienced open-circuit diver, I had huge problems with maintaining my buoyancy, positioning my body in the water, and accepting limited head mobility. At that time, the dive fit me so badly that I took a few years break from closed circuit diving considering that I might not be made for it.

Now, as I am hovering in the water with Liberty light, with ease and comfort, I realize how much times have changed since then. The first major change I noticed about 10 years ago with the increasing popularity of units like JJ-CCR and rEvo, when many more serious divers have switched to the closed circuit. In 2015, I overcame the bad feeling of my first experience and once more began exploring the beauty of “silent diving”. Since then I have spent more than 500 hours underwater on the rEvo. I would not need to document my experience, yet it may be important in terms of the relevance of my opinion.

The Czech company Divesoft had been known on the market for its high quality gas analysers for a long time before it launched its first, with technology-loaded back-mount rebreather. It was Liberty that won the CE certificate in 2014 without any exceptions and started a new period of rebreather development that completely changed the perception of “bubble-free diving”. Gradually, as the market has become saturated as more players with advanced technologies entered the game, the challenge for Divesoft was clear - turning the design spirit back on full throttle and building a unit that again comes ahead of the competition in terms of technology. Indeed, technological features are objective characteristics, otherwise a heated wave of discussion would probably be triggered based on this article. Nevertheless, since February 2020 Divesoft comes out with a new jacked hyper machine.

In addition to being equipped with advanced technologies, Liberty light is especially low on weight! This is where it shines among the competition the most. 15.8kg of total weight without tanks and scrubber make it not only one of the lightest CCR kit in the business, but it makes it a sovereign game changer. By removing the head, which together with handsets and all electronics weighs roughly 5 kg, and putting it in the hand luggage, we look at 10.8 kg of kit, which comfortably fits in the 23 kg luggage including pair of light fins and a cosmetic bag, making the travelling with the unit without additional access luggage fees possible. This has not been here yet!

A rebreather diver will always be more or less a technical diver, hence a bit of a handyman’s skill is always needed. Even though the enthusiasm for handling the advanced technology belongs to technical diving, it is always nice to have a test of accuracy at the end of each task. In this respect, Liberty Light has an edge. The device includes 2 fully standalone electronically controlled circuits with all components. Each circuit has its own 2 oxygen sensors, 1 helium sensor, 2 pressure sensors, solenoid valve and its handset. Complete redundancy and communication between the two circuits represents the test of correctness for most of the tasks that the diver evaluates during both the preparation and the operation. No speaking about the fact that it greatly reduces the risk of system failure during the dive. But let's go over it step by step in practice.

Anne, a native of Dresden, decided to test the unit in Dahab in the CCR friendly dive center SCUBA SEEKERS. She has got 13 years of overall diving experience. Together with Jakub, Divesoft's head instructor trainer, they put all the parts together and pack the radial scrubber. Since Anne is certified on the CCR Liberty, the procedure is easy to understand for her. Actually, not that is was very different from procedures on other units though, however the great advantage of Liberty Light is the checklist and its associated accuracy tests.
The first enhancer is a (1) calibration probe that enables calibration of both standalone circuits with minimum oxygen consumption. Whereas some units might use up to 20 bars of oxygen to calibrate the sensors, Liberty effectively gets the job done with a negligible amount of gas.
2. Another great help in the check procedure provide (2) pressure sensors that not only set the parameters of decompression calculation when diving at altitude, but accurately measure the loop pressure during a negative test. Again, one of the features that no other manufacturer offers.
3. Kitted up with Liberty Light and walking toward the sea, Anne looks almost like a sport diver. The unit sits high on her back and seems to be really (3) compactly sized.
4. My eyes are immediately attracted to the green light on top of the unit. It is a (4) buddy display that gives a color light signal to the dive partner that the gas in the loop is optimal. Another very useful feature of the unit.

Despite the Liberty's undisputed technical achievements, its ability to serve the diver is what really matters, hence I'm excited to hear Anna's impressions about the unit after the dive.
She returns from the water with a smile on her face. Again, I would point out how compact and attractive Liberty looks on her. According to Anne's words, the unit appears small underwater as well. She feels much more agile with it, not only in comparison with the open circuit twin set, but also in comparison with the original "Great Liberty”. It feels so small that it pressed against Anne’s lower back causing a slight pain. A stand, that would transfer part of the weight to the butt, would be a perfect solution. According to Jakub’s words, such a stand is already in preparation process and will be available soon.
Excellent work of breathing has always been Liberty's strong point and so it remains with her smaller sister. A major innovation, however, are the manual injection valves of both diluent and oxygen placed on the mouthpiece. Both are in the best visually controlled zone and operate with millilitre-like accuracy. Anne says, however, that thanks to the massive BOV and hoses to the injections, she has slightly impaired head mobility. Likewise, due to massive design of the mouthpiece, her jaw muscles get tired, which in the long run, bothers her.
“But the freedom is overwhelming” - says Anne. “In the water I feel almost like single tank sport diver. Scrubber lasts in warm water for 6 hours and if I would find a CCR supportive dive center, I would definitely take it with me to Australia.” Palau, Australia and New Caledonia are Anne's next destinations to travel to.

Let's go briefly to my feelings about Liberty Light. As soon as Jakub accompanies me through the checklist, several of Liberty's features amaze me. In particular, the fact that it has (5) two equivalent circuits, which can also function fully independently, can turn to be crucial when traveling. While in the event of failure of key components on other rebreather unit, diving typically ends, Liberty’s second circuit can fully operate and the fun can continue. The solenoid valves are waterproof, the sensors are well insulated, so the unit is also extremely resistant to partial flooding.
Now, as I glide through the water with ease with Liberty on my back, I have to say that it’s a very precise working machine. Both solenoids alternate in injecting oxygen and supply the loop with incredible accuracy. As a DSV user I expected a significantly impaired head mobility due to BOV and both supplying hoses, but surprisingly it's not the case. The comfort of the mouthpiece is comparable to the one on rEvo, it doesn’t bother me at all. Conversely, (6) injections placed directly on the mouthpiece are a fantastic solution that I greatly enjoy. Even though it’s possible to make a mistake and manually add oxygen instead of the diluent, since everything is happening in the field of vision, the process is under eye surveillance, hence the mistake less likely. Speaking of the surveillance, I must again mention the buddy display built into the top of the unit head. With its brightly shining multicolour LED, it gives the partner a visual signal as to whether the gas I am currently breathing has the optimal composition under the given conditions. It works similarly to a duct tape label with a MOD for a buddy to check at certain depth.
The excellent head-up display combined with vibrating handset works so vigorously that the alert can barely be overlooked. For a brief moment when the system knocked out an oxygen sensor from the voting, both handsets literally shocked me!
Another cool feature I want to mention is “Bailout remaning time”. We know well that rebreather allows us to greatly push the boundaries and change the dive plan to sphere where we wouldn’t get on open circuit. However, the supply of bail-out gas means a clear stop for further changes, respectively it requires very careful management. Divesoft came up with a unique solution. By defining the bail-out gas type and supply in the menu, the unit will alert us in time when we approach the point that still means a safe return to the surface when bailing to open circuit. In other words, if we change the dive plan “on the fly”, Liberty will let us know when we still have enough bailout gas to get back safe in case of CCR unit failure.
I return from the dive with a smile on my face, just as Anne. Liberty not only is a pioneer in innovation, but also in terms of diving ability occupies the place in the front of the peloton. Looking at this machine from “Star Wars” I agree with the words of Jakub. For roughly the same money a diver has to pay for any top-notch rebreather, he gets the most for his money in Liberty. 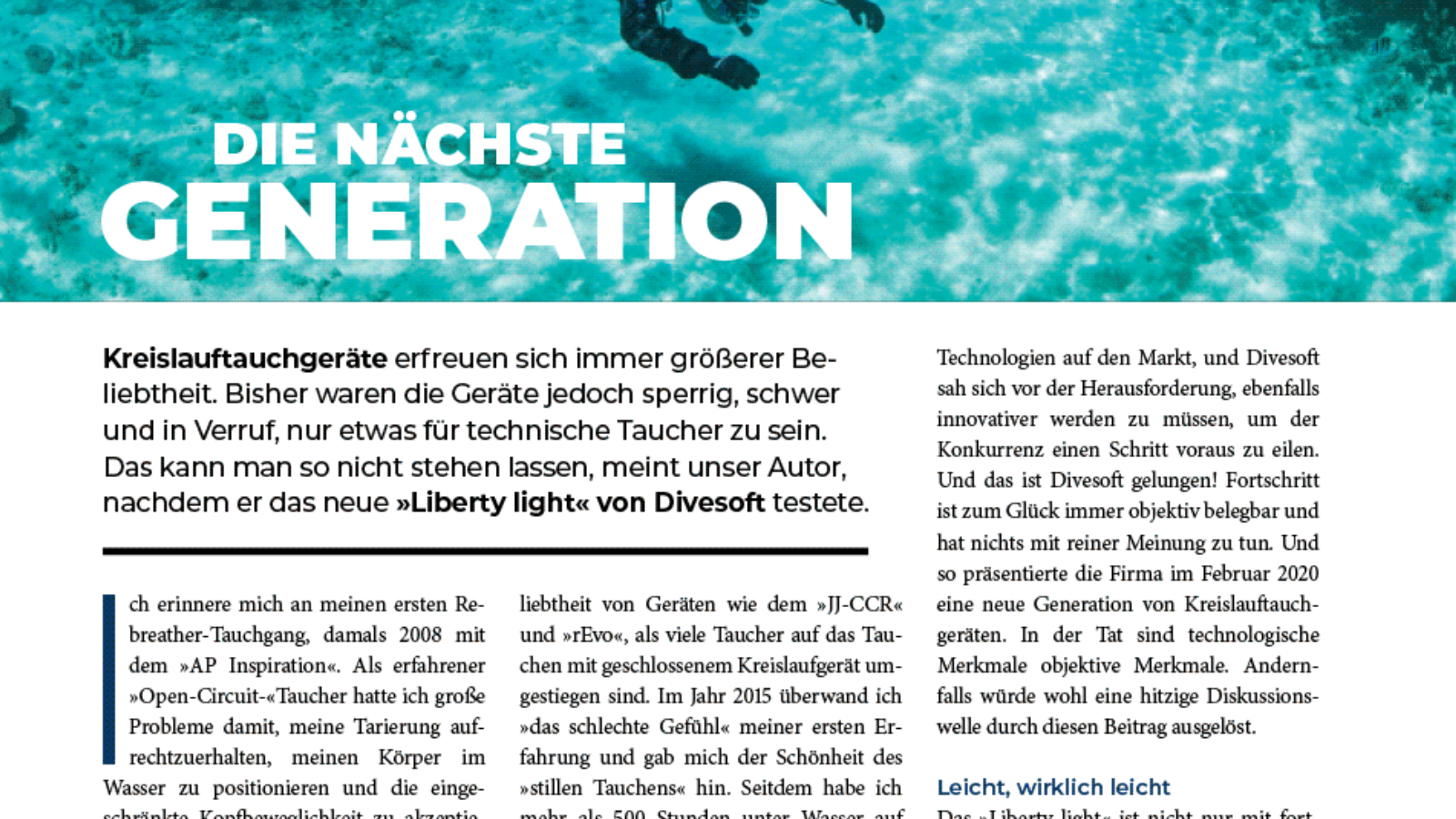 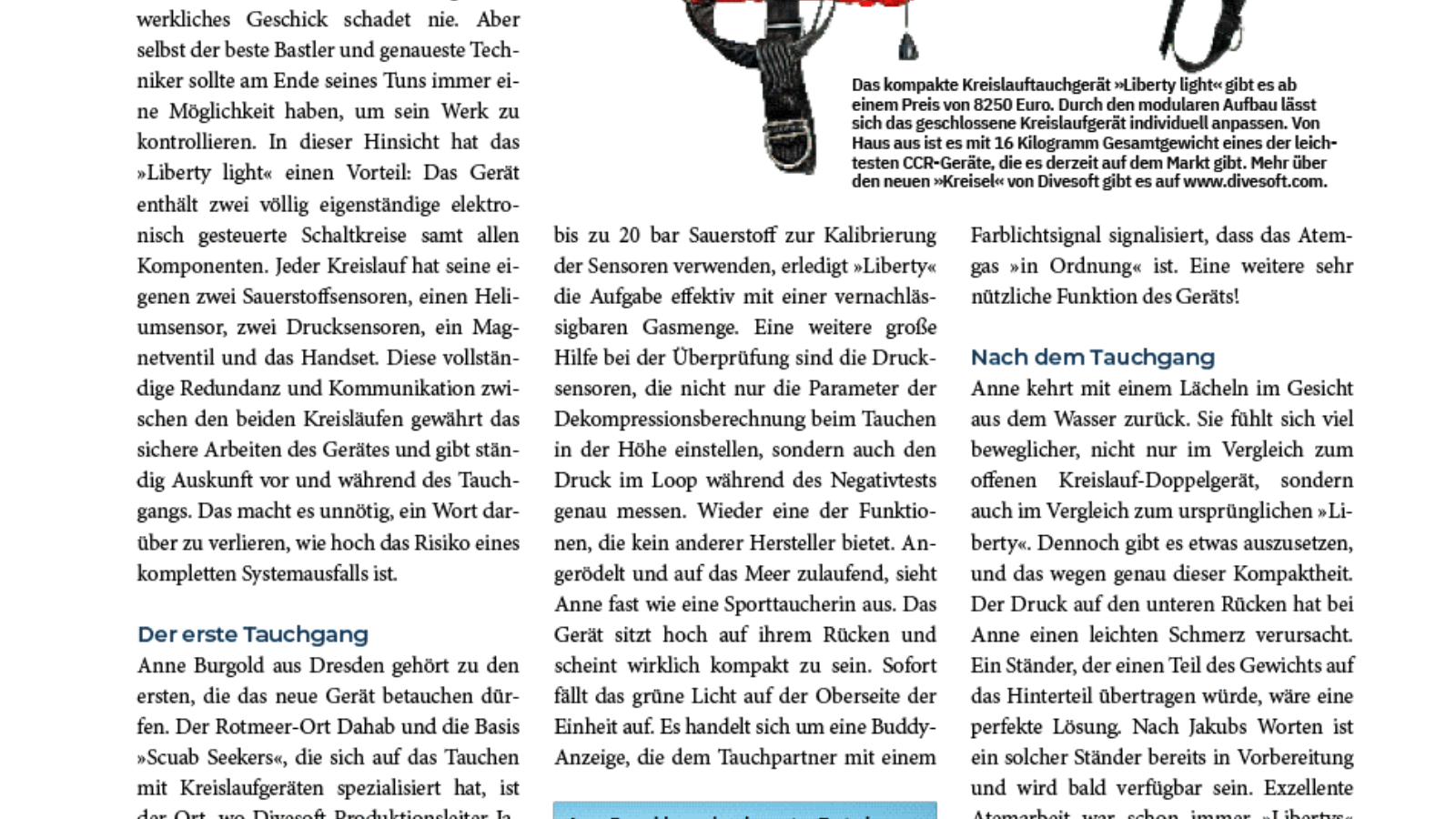 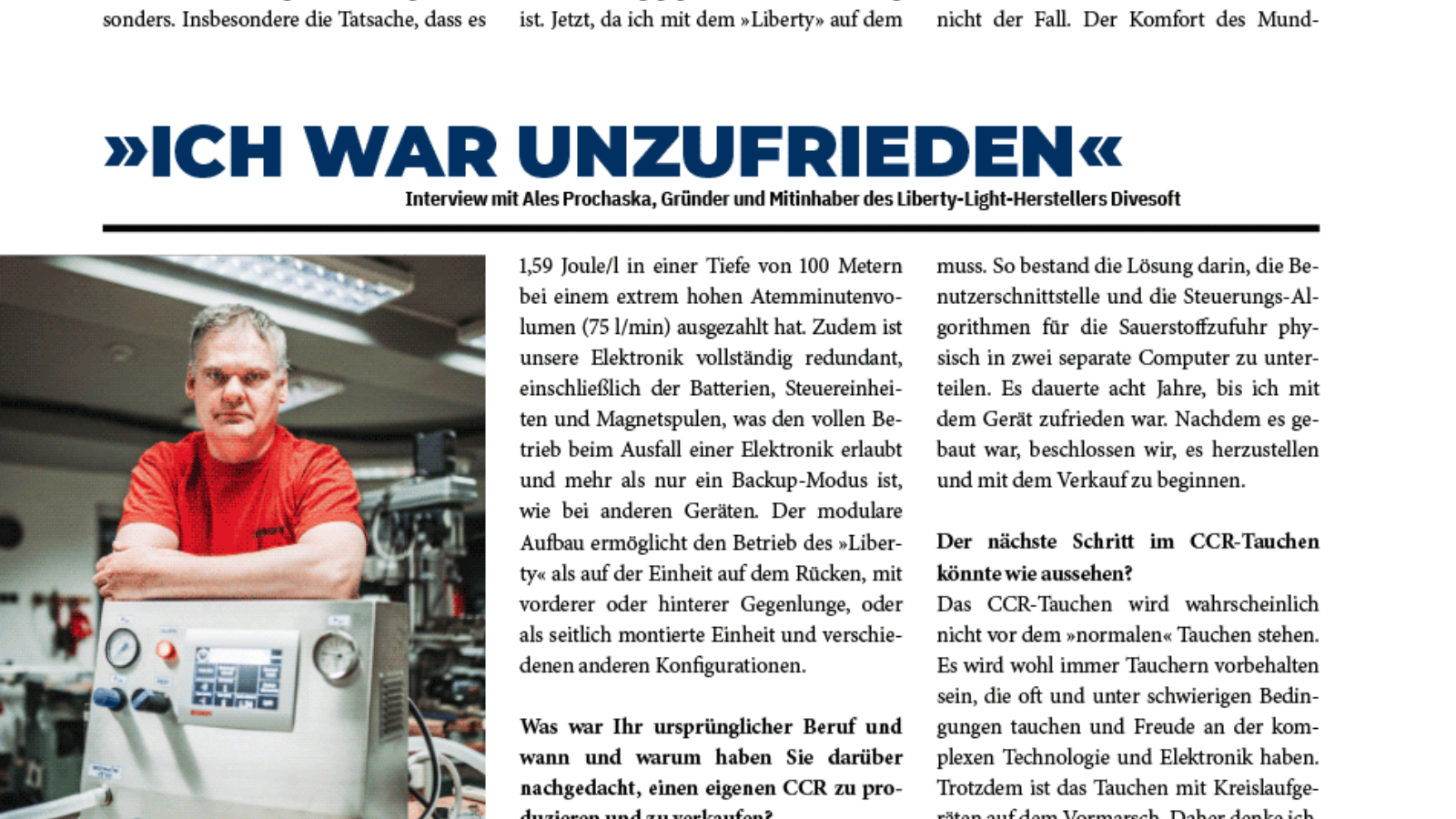 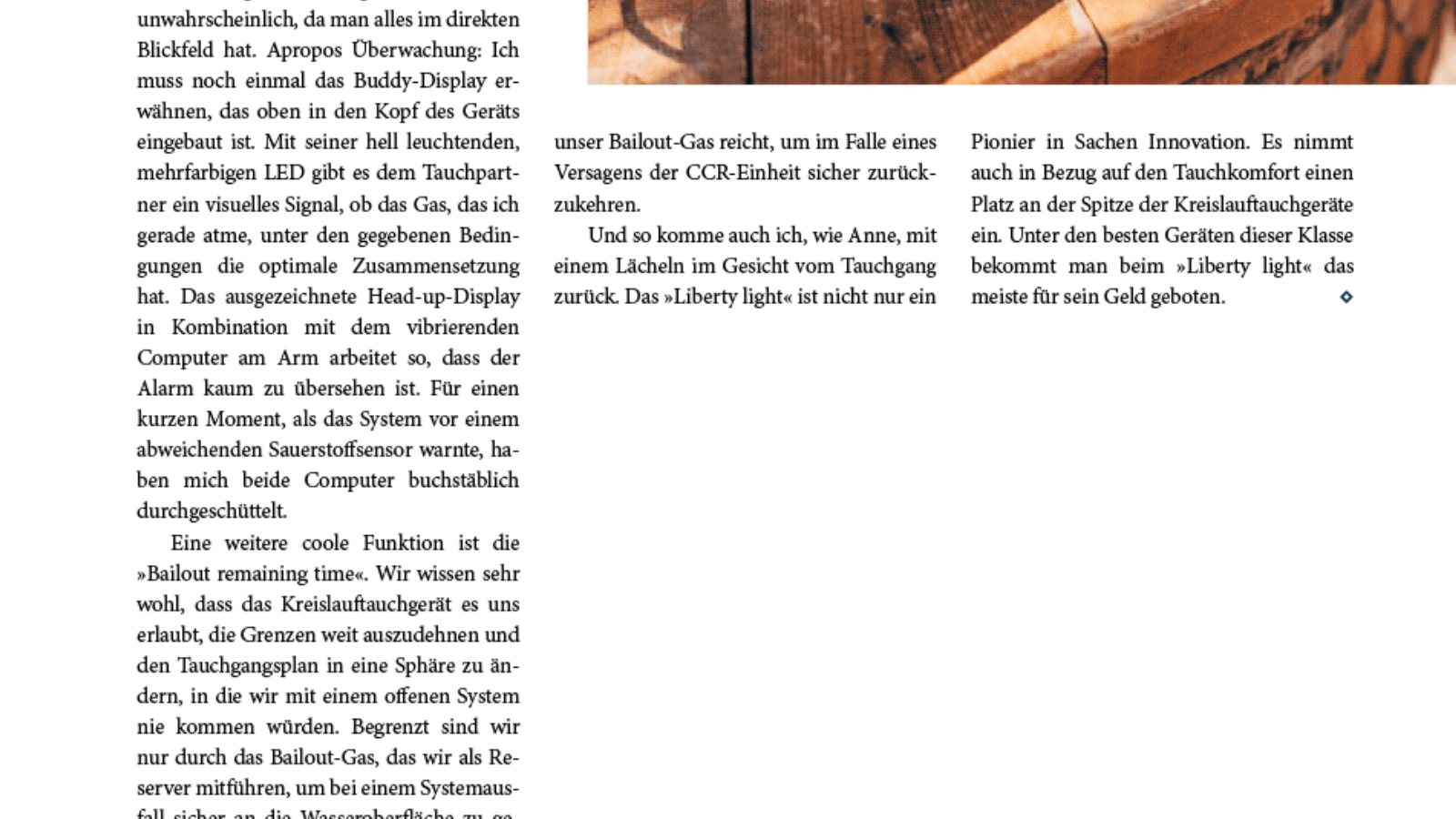