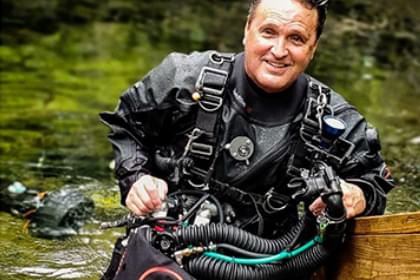 Brett has been the Director of KARST Underwater Research (KUR) for over 17 years. KUR is a registered 50lc3 nonprofit organization and currently maintains multiple permits in the state of Florida for continued underwater cave documentation research and science.

Mission Statement: KUR is committed to the preservation and protection of karst aquifers and the quality of their water by conducting relevant scientific research and documentation of surface features and corresponding underwater caverns and conduits.
Brett Hemphill has been exploring since he can remember. Having moved five times before the age of 12, including a year in the country of Japan, his desire to investigate his ever-changing childhood surroundings iswhat certainly molded him into the person he is today. He would climb every hill and tree to its summit and search every creek to its source; there never seemed to be enough to satisfy his curiosity. At the age of 14 he attended a dry cave excursion. While his other classmates slept, Brett's restless nature convinced two counselors to wake up. Within several hours the three found a yet undiscovered section of the cave. Small though this discovery may have been, the feeling it provided stayed with Brett for many years to come. During the early nineties, it was believed that few new discoveries were left to be found in the realm of cave diving throughout Florida. During thistime Brett developed no­mount and side-mount equipment and techniques, allowing him to probe and explore every small spring and tidal vent he could locate in central Florida. After the discovery of several significant under water caves, he formed Hydro Geo in 1994. This group studied, explored, and documented several one of a kind coastal under water caves in central Florida. These discoveries provided a new awareness and knowledge pertaining to coastal karst central Florida. Realizing that small under water caves often could lead to larger sanctums and discoveries he adapted pre-existing side mount designs and created a specialized system known as the Armadillo. Brett has filmed and assisted in the filming and production of many underwater cave documentaries throughout the years since then. For over 28 years, with the support and companionship of family, friends, and team members, Brett Hemphill has assisted in exploring, mapping, and documenting many of the most unique, deepest, and longest underwater cave systems in the United States and abroad. In 2008 the KUR team set the United States deep underwater cave record at Weeki Wachee Springs in the state of Florida at 407' only to break this record once again in 2013 in Texas at Phantom Springs at just over 465' deep approximately 8000' into the cave. In October of 2014 Team Karst additionally made the deepest connection between two under water caves in the United States when Weeki Wachee and Twin Dees caves were connected 7800' feet back at a depth of 330'. In the years to follow, KUR was able to achieve the first true HD cinematography bellow 400' and over 8000' into the Weeki Wachee system. Currently KUR is documenting the Line Eater Cave system to distances beyond 25000', creating adapted technology along the way to push the limits of exploration safely and effectively. Speaking Engagements & Presentation Topics: 1) Karst topography and aquifers, cave awareness, conservation and exploration. 2) Exploration logistics which include application and safety for overhead environments. 3) Consultation and design for underwater cave equipment such as:side-mount BCD, CCR's and additional rebreather configurations and applications for exploration.

this page is under construction

The Realization there were unexplored frontiers waiting to be found.

Partitioning my thought process. Knowing that my equipment is functional, understanding its limitations. This allows me to focus on the environment.

Although I have taken breaks over the years, my desire to search and explore is still intact.