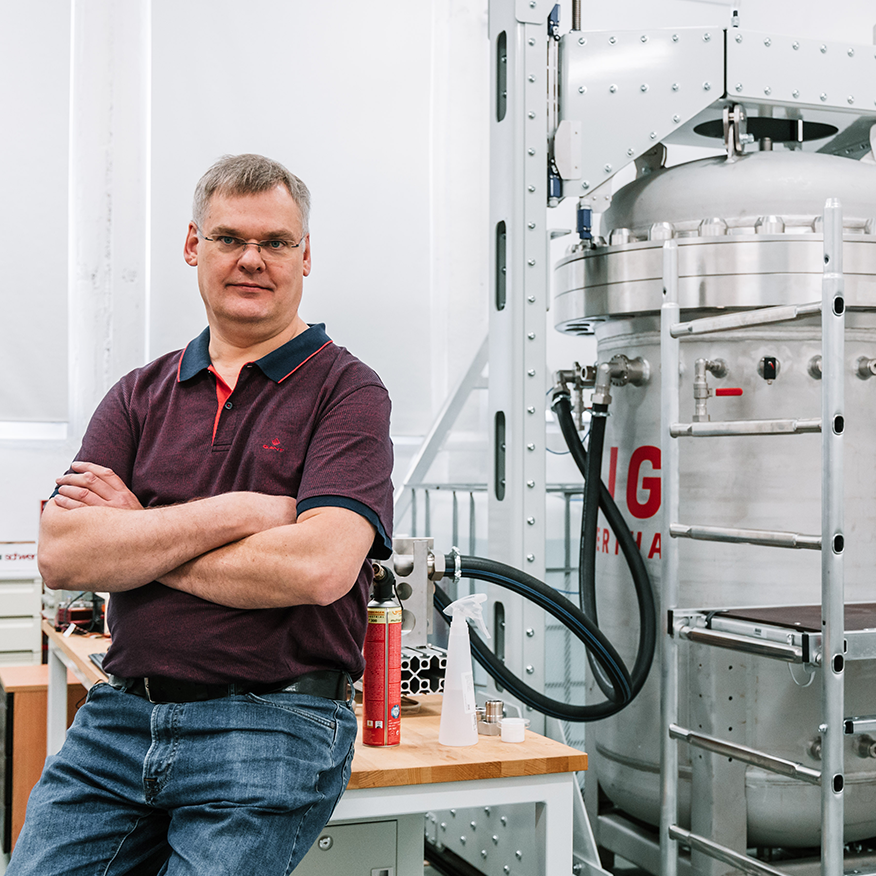 For CCR Liberty testing we use a machine that we familiarly call "Big Bertha". Our co-founder Aleš Procháska answers questions about how this testing device works.

What exactly happens to the Liberty during testing?

We simulate the diving environment. The diver is replaced by instruments in these unmanned tests. A stainless steel mannequin, called Iron Man, carries the rebreather on his back. He breathes through "artificial lung", a computer-controlled breathing simulator that can simulate different breathing rates, depths of inhalation, and the flow of the breathing cycle.

Another device simulates oxygen consumption and carbon dioxide exhaled. A rebreather is submerged in water whose temperature can simulate conditions from the Arctic to the Persian Gulf. The water is in a massive chamber that pressurizes to simulate depths approximating 300 feet - and in fact, we went a little further in designing it to reach the magical 1,000-foot milestone. 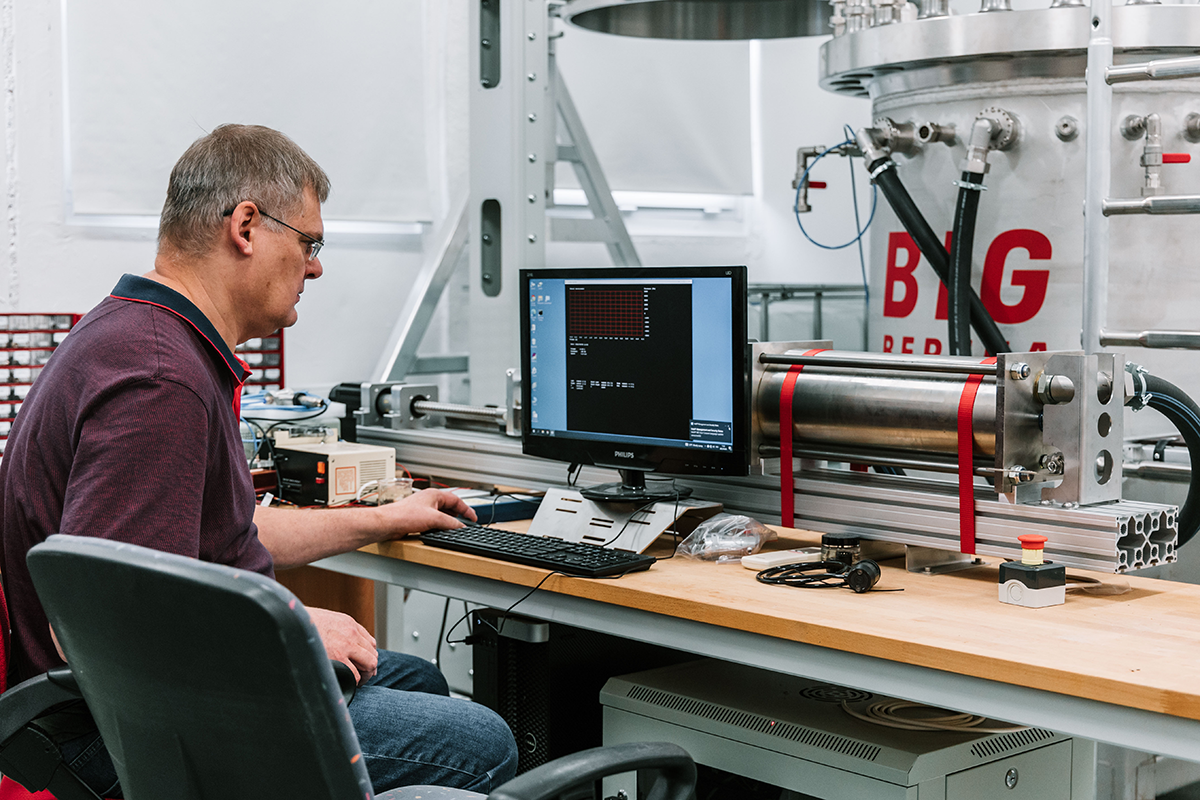 What does it measure?

The basic measurement that most users are interested in is the work of breathing, which quantifies the ease of breathing with the rebreather. This is important both for the comfort of the diver, but most importantly, if the work of breathing is able to avoid any CO2 retention at extreme depths during increased exertion combined with high gas density.

The second key parameter is the endurance of the scrubber, how long it can absorb exhaled carbon dioxide before the CO2 concentration rises above the permissible limit.

In addition to these parameters, "Big Bertha" measures the hydrostatic imbalance, which shows how the breathing resistance changes when the diver is upside down or perhaps in the supine position. Also, the ability of the device to maintain the oxygen level without any fluctuations. Monitoring of where the water that condensates from the exhaled moisture goes, the characteristics of the pressure relief valve and the automatic diluent delivery, the temperature of the inhaled mixture, or whether some of the exhaled air remains in the mouthpiece until the next breath. Big Bertha gives Divesoft the ability to create a detailed analysis of the functionality and performance of the Liberty rebreather.

What conditions are rebreathers tested for?

The standard test conditions for a rebreather are a depth of 100 meters, a water temperature of 4°C, and a carbon dioxide exhalation rate of 1.6 liters per minute, which corresponds to the heavy exertion of the diver. No diver would be able to bear such a load for long, but the test equipment can withstand it for hours.

Then there are other combinations of parameters used for different specific tests, but they always have one thing in common - they exceed human capabilities to make sure that the apparatus under test can handle any load that a real person can put it through. 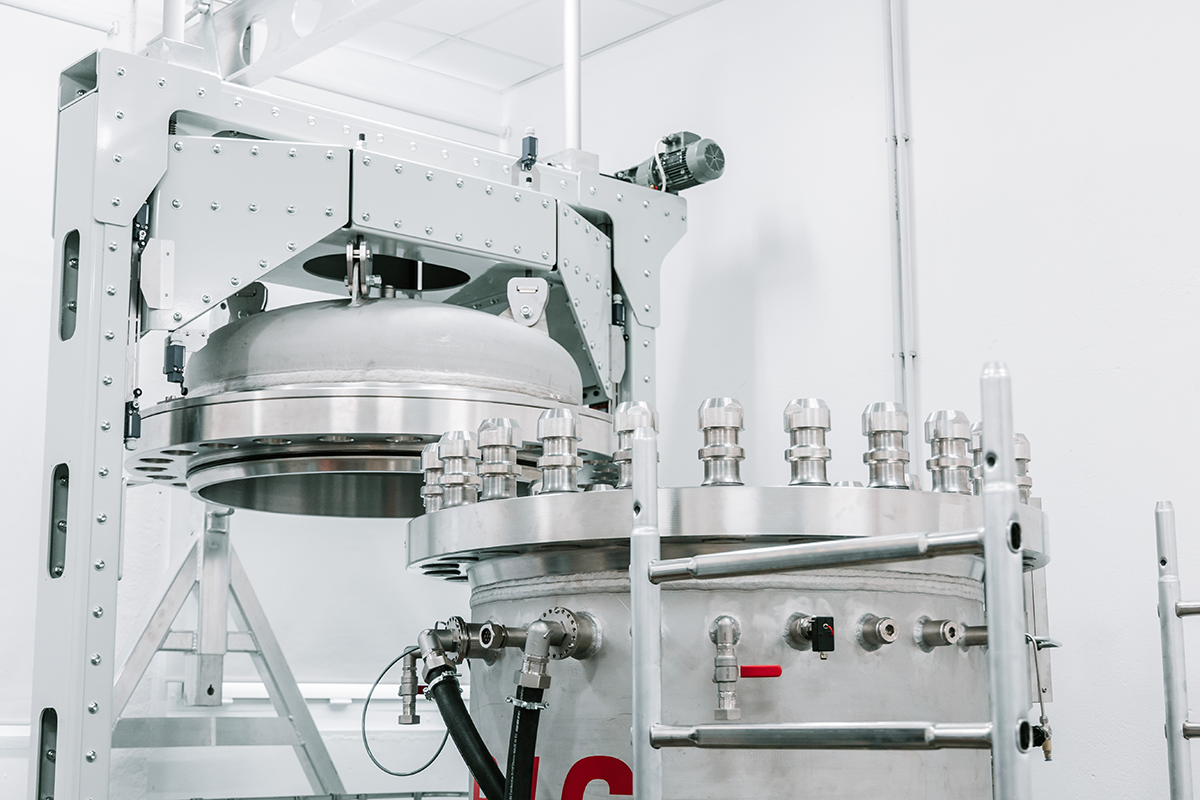 How does Bertha allow for better testing?

Divers with rebreathers have long traveled beyond the 100-meter milestone and continue to dive at depths to which the devices have never been tested for. While the behavior of the device can be estimated from testing at shallower depths, there are several non-linear dependencies, and until its performance is measured, it will always be a guess. Therefore, Bertha was developed to measure and describe the behavior of a breathing apparatus at extreme depths, which was not possible before with previous equipment.

The second fundamental thing is accessibility. We have Bertha in-house, so we can test the devices we are developing as often and as long as we like. Although several laboratories can test rebreathers within a hundred or even two hundred meters, such testing is always lengthy.

What is the future vision for testing, are we going to improve it any further?

The test facility built around Bertha is for research and development and is therefore constantly being improved to be able to test even newly developed rebreather features. Development will never be finished because we are constantly striving to innovate and introduce new ideas. With innovations and new ideas come new problems. We will need to always have the capacity to test our designs safely and effectively. Other improvements are being made to facilitate testing, for example, we are now completing the installation of a handling device that will allow the chamber to be opened and closed automatically. That is not an easy thing to do because the pressure vessel lid weighs 600 kilograms. Until now, we have been handling it with a crane, which can be time consuming.