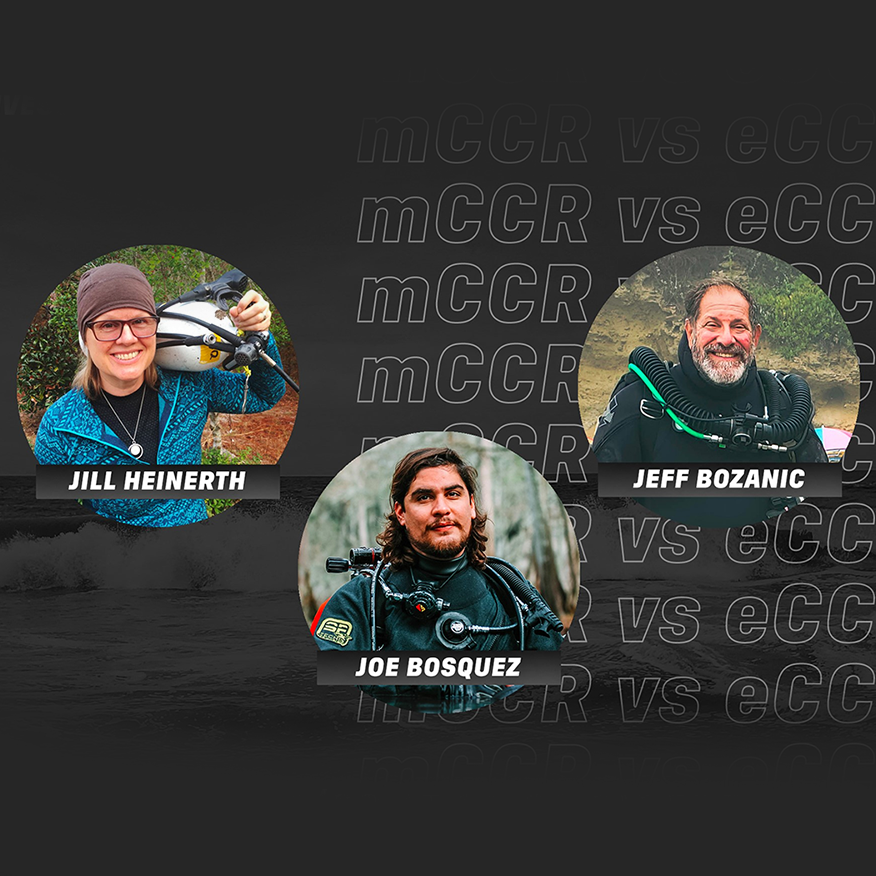 This time Joe is hosting Jill Heinerth and Jeff Bozanic discussing electronic CCRs, their history and how they have changed over time.

Jill and Jeff start talking about their diving history, involvement in the CCR development and current diving practices. The control system of mCCR vs eCCR is one of the main aspects of this talk and defining the eCCR and the difference between gas control and gas control-dive management. Jill explains how electronic components in CCR adding a sort of "safety net".

She believes that there is not such a thing as purely mechanical or electronic CCRs, but instead, all CCR are a combination of two systems. In addition, Jeff shares his working/diving experience and reflects on why he likes to use the eCCR, along with mCCR, during his work underwater. He thinks the combination of the two systems together gives an extra "safety net" during task loading when the diver is most likely to pay less attention to your CCR. Jill builds on the importance of knowledge of manual operation of CCR manually in the event of an electronics failure underwater. So, is eCCR safer than mCCR? This and other questions about eCCR, including diving preferences, training, dive plan, cave diving, mouthpiece retaining straps, and more.

In the second half, Jill and Jeff talk about the history of eCCR. They share their stories on their early CCR diving, which included early prototypes that did not involve any electronic and even sensors, and how problematic maintenance and their use where. They also talk about the future sensor development and sensor technology, which is still constantly evolving. They also discuss the changes over time in terms of technical diver mindset, modifying CCR and impacts, software of user interface. Finally, you will learn about the diving safety rule and some thoughts about eCCR diving.

Jill is an underwater explorer, writer, photographer, speaker, and filmmaker. A pioneer of technical rebreather diving, she has led expeditions into icebergs in Antarctica, volcanic lava tubes and submerged caves all over. Jeff's experiences include leading and participating in over 60 diving expeditions in the past 40 years. Expeditions that have taken him to places like Palau, the Canary Islands, Mexico, and even Antarctica. His textbook Mastering Rebreathers has been used by countless students and dive instructors.

mCCR vs eCCR #2 | with Jill Heinerth and Jeff Bozanic