What is a rebreather? Do I need one as a recreational diver? 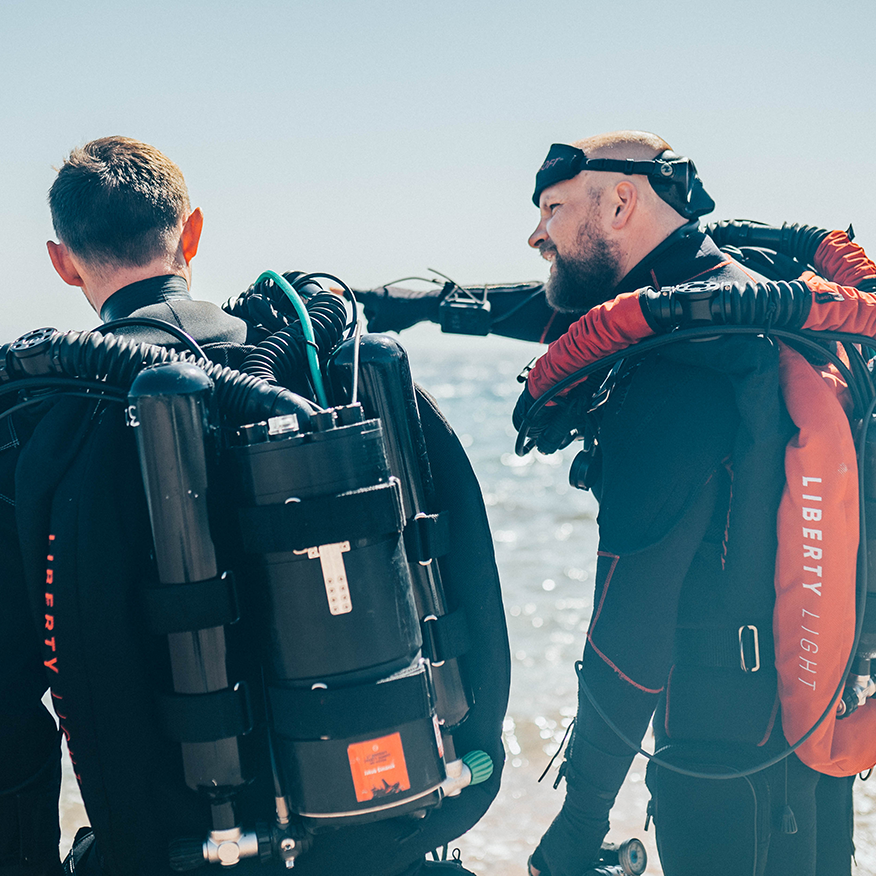 Let's take for example; a diver who wants to see a mysterious shipwreck laying on the seafloor around 30m (100 ft). They must have wondered how it could be possible to explore as much of the wreck with the least amount of decompression? If we used a conventional SCUBA apparatus otherwise known as, "Open Circuit", the gas supply will be limited to only an hour so depending on many variables. If we want to stay longer we will have to bring more cylinders and that makes the dive that much more work and logistically difficult to undertake.

In open circuit our exhaled bubbles are wasted into the water column. Let's try to fix this by creating a more efficient system and recycling the exhaled bubbles. This apparatus is called a "Rebreather".

How does it work?

Each breath we inhale contains 21% oxygen. This oxygen is vital so that our cells can get energy from nutrients. Thus, we cannot live without it. However, we only use part of the oxygen in each breath, and the rest we breathe out. As a product of metabolism, we exhale carbon dioxide along with the rest of the oxygen. So, we exhale a mixture that contains 17% oxygen and 4% carbon dioxide.

The Rebreather is a closed-circuit breathing apparatus that recycles exhaled air. The accumulated carbon dioxide exhaled gas is removed by a chemical scrubber, in which a simple chain of chemical reactions takes place, resulting in a moist and warm CO2-free gas. The consumed oxygen is replenished from a separate oxygen cylinder by being injected into the breathing loop. 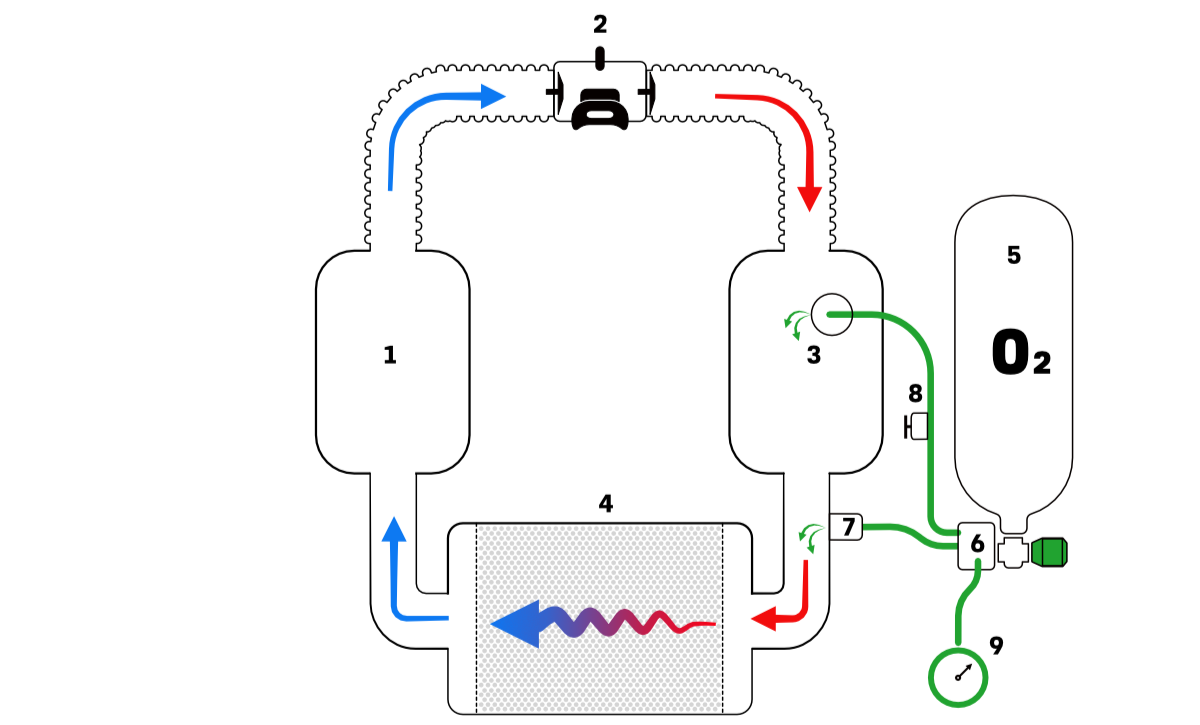 Oxygen sensors measure the amount of oxygen in the breathing loop, and if the oxygen drops below a set value, the computer opens a magnetically controlled valve and injects a precise amount of oxygen that needs to be replenished. The diver only monitors the correct functioning of the device using the display on the handset. Should anything go wrong, the device also notifies with an alarm. 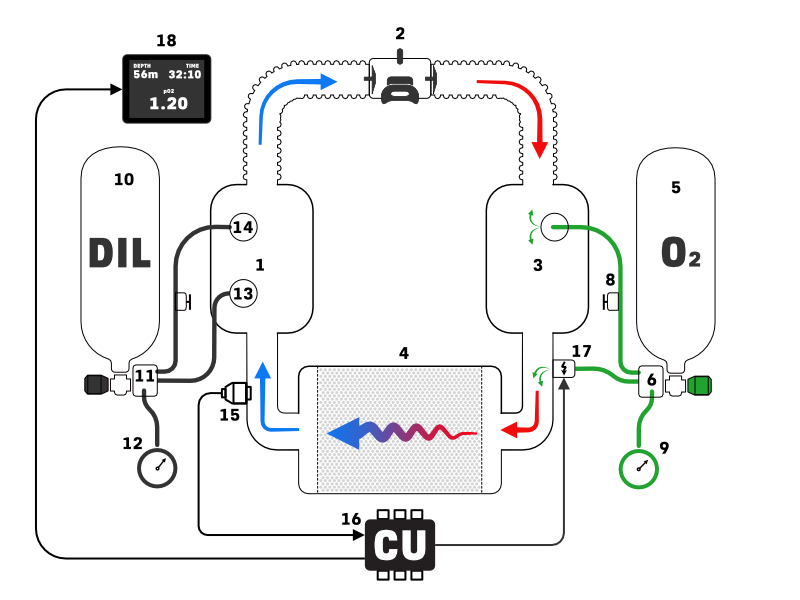 In order for a diver to dive to great depths, it is necessary to dilute the poisonous oxygen with something. So we use second cylinders of diluent on the rebreathers. The diluent gas is added to the loop to reduce the partial pressure of the oxygen. Air is used as the diluent, or trimix for greater depths.

So what are the advantages of a rebreather? There are many. To begin with, our gas consumption is minimal. While with a classic SCUBA apparatus we exhale every breath into the water and lose the gas, with the rebreather we consume about 1.5 litres of oxygen per minute. The point is that it doesn't matter what depth it's at, because our tissues still need the same amount of oxygen no matter what the ambient pressure is.

The oxygen consumption remains the same whether at 10 m (3 ft) or 100 m (300 ft). The diluent is practically consumed only on descent. An experienced diver can efficiently manage gas consumption to an absolute minimum. For a dive to a depth of 40 m, about 60 - 100 litres will be needed, and time does not play a role here at all.

Let's take a specific example. Three divers are diving on a magnificent wreck that lies at a depth of 30 m (90 ft) in a tropical sea. Diver A has recreational equipment (12 litre cylinder), Diver B has technical diving equipment (twin 2x12), Diver C has an electronically controlled rebreather. How long can divers explore the wreck if they have to return to their boat in exactly one hour? 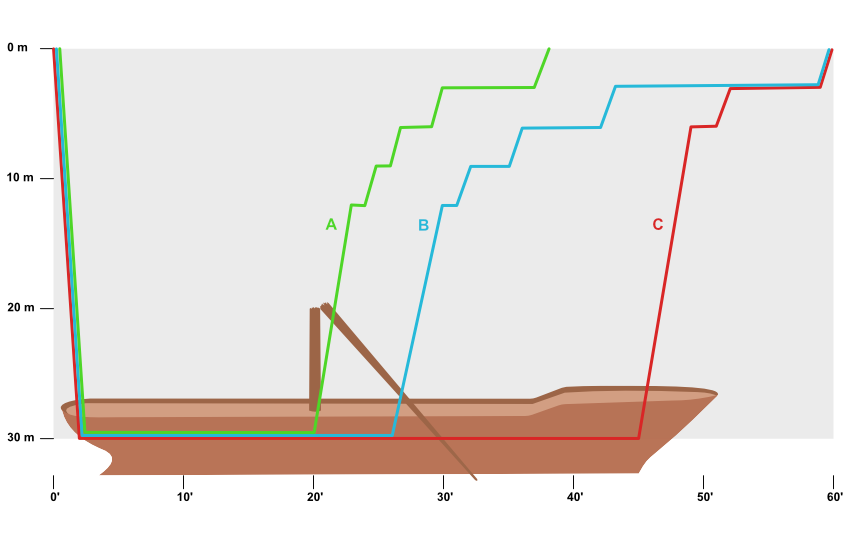 Diver A can spend as little as 20 minutes on the wreck. After that he has to return to make sure he has enough gas in a 12 litre cylinder (he has a consumption of 22 l/min and keeps a reserve of 30 bar). He spends a total of 18 minutes on decompression. That's almost the same time as on the wreck. He will return to his ship after 38 minutes.

Diver B is better off. Because he is wearing a heavy twin, his gas reserve is sufficient for a full hour of diving, and he still has 70 bar left. But to make it back on board in time, he can only enjoy 26 minutes on the wreck, because he has a tiring 34 minutes of ascent and decompression ahead of him. That's assuming he dives with air. If he's a little smarter, he can extend his time on the bottom by up to 9 minutes by using nitrox.

Diver C doesn't have to worry about his gas supply at all. He'll have enough oxygen in reserve for six dives, and probably enough diluent. He'll enjoy the wreck for 45 minutes, and the ascent with decompression will take only 15 minutes.

But while diver B now has to fill or change cylinders for the next dive, the rebreather diver now calmly leaves the apparatus as it is and goes off for a snack. The same will be true between the second and third, or third and fourth dives on the same day. In the evening, he just unplugs the rebreather head to let the oxygen sensors dry out, and tomorrow he's off to a new start without having to change anything.

If something unexpected happened to our three divers A, B, C on the wreck, the first would be very limited in time to resolve the situation, and the second would be only slightly better off. The third diver with a rebreather would have literally hours to resolve the situation. Even if he started breathing very fast because of the stress. In such a situation, ventilation can jump to 50-70 litres per minute. Try calculating how fast you lose air at 30 meters in such a situation. With a rebreather, it will have almost no effect on your gas supply in that situation.

I won't be so cold with a rebreather

So now I know that even recreational divers benefit from a rebreather, and I don't even have to be a technical diver, where of course the gas savings are many times greater. The benefits don't end there. As I mentioned at the beginning, when CO2 is removed, a chemical reaction creates heat and moisture, so we breathe significantly warmer air than with an open circuit. 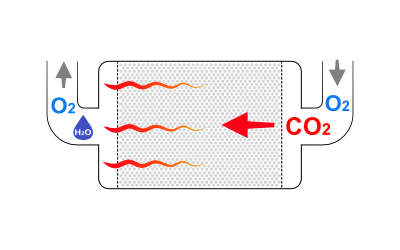 You won't be able to tell at first try, but if you did the same test as I did, you would see a major difference in the retention of your own heat during the dive. I did two identical dives in a cold lake in one day. The water was 4°C, the dives had the same depth of 20 m (60 ft), time 45 minutes and path, I wore the same dry suit and wetsuit on both dives. The difference was that the first dive was done with a classic SCUBA open circuit and the second with a rebreather.

During the first dive, I started to feel the cold after 30 minutes of the dive and by the end I was already thoroughly chilled. After about an hour break, I put on the rebreather and did an identical dive. Even though it was the second dive, relatively shortly after I froze, the cold feeling didn't come until the very end of the dive, so I walked out of the water with a smile on my face. 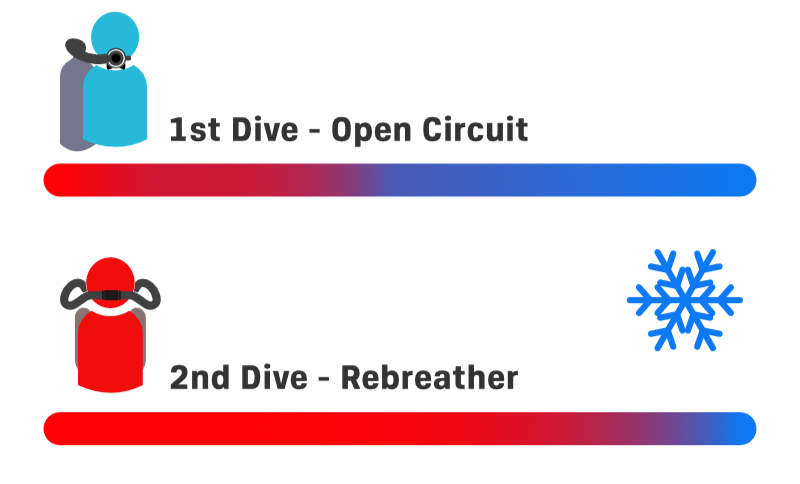 Another advantage that nature lovers and photographers in particular will appreciate is the absence of bubbles. We don't exhale the gas into the water, but back into the loop, so we don't make any disturbing noise underwater. Thanks to this, you'll find that aquatic animals will take you in their stride, and let you come within an unexpectedly short distance. 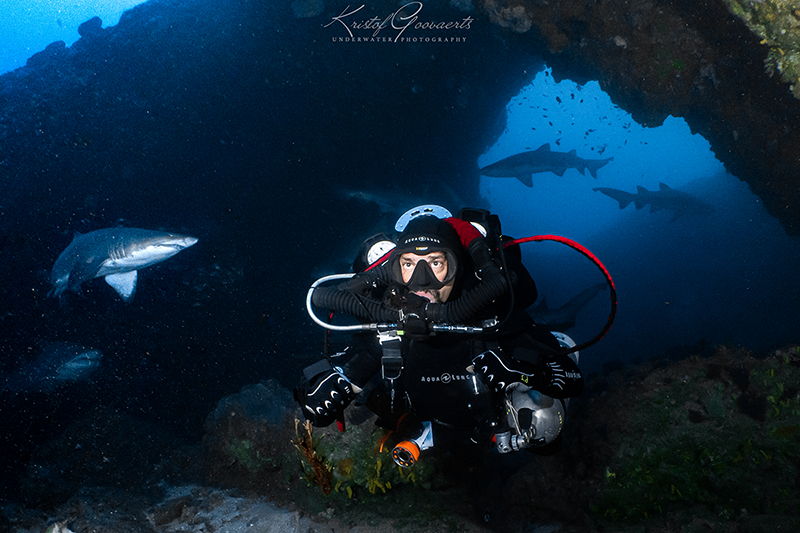