The most spectacular dive of 2022 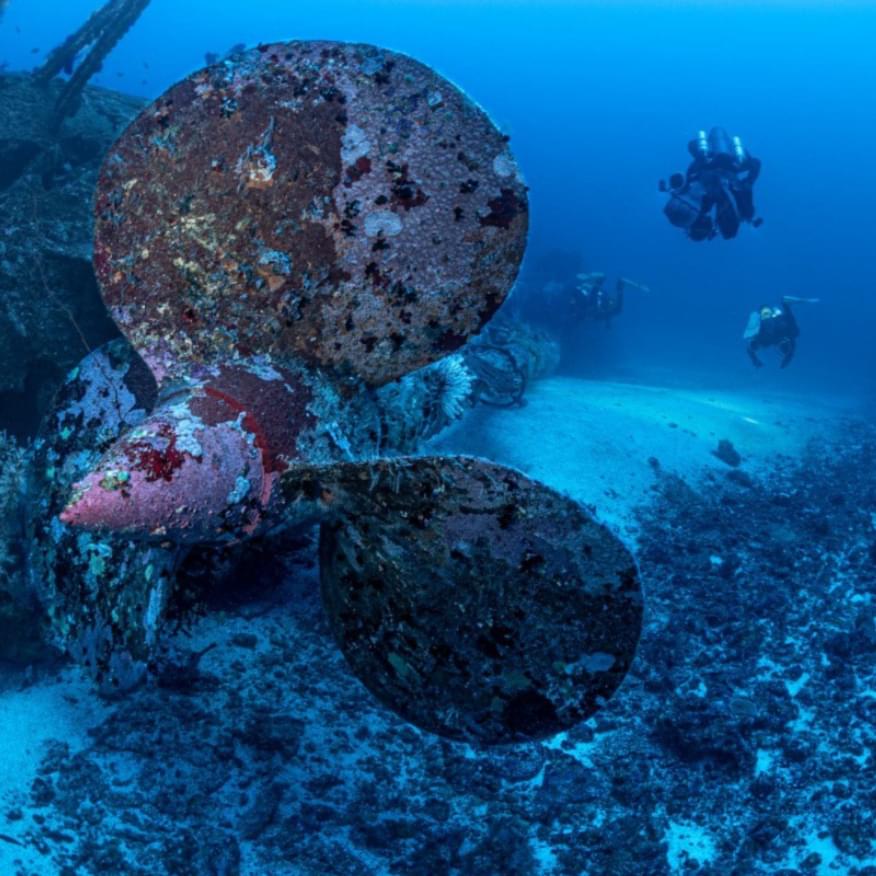 What was my best dive of the year? As expected, the answer is not easy at all. There has been a number of spectacular dives that I got to do in 2022 ranging from diving on the 14th-century church in local waters to the caves in Bosnia and Herzegovina, exploring cave systems in Florida, wreck hunting in the English Channel and cave, wreck and a reef diving exploration in Palau. Lots of diving with amazing people with no shortage of good stories and incredible memories to keep.

One dive, however, comes to mind due to a number of factors and it is the wreck of USS Perry in Palau. 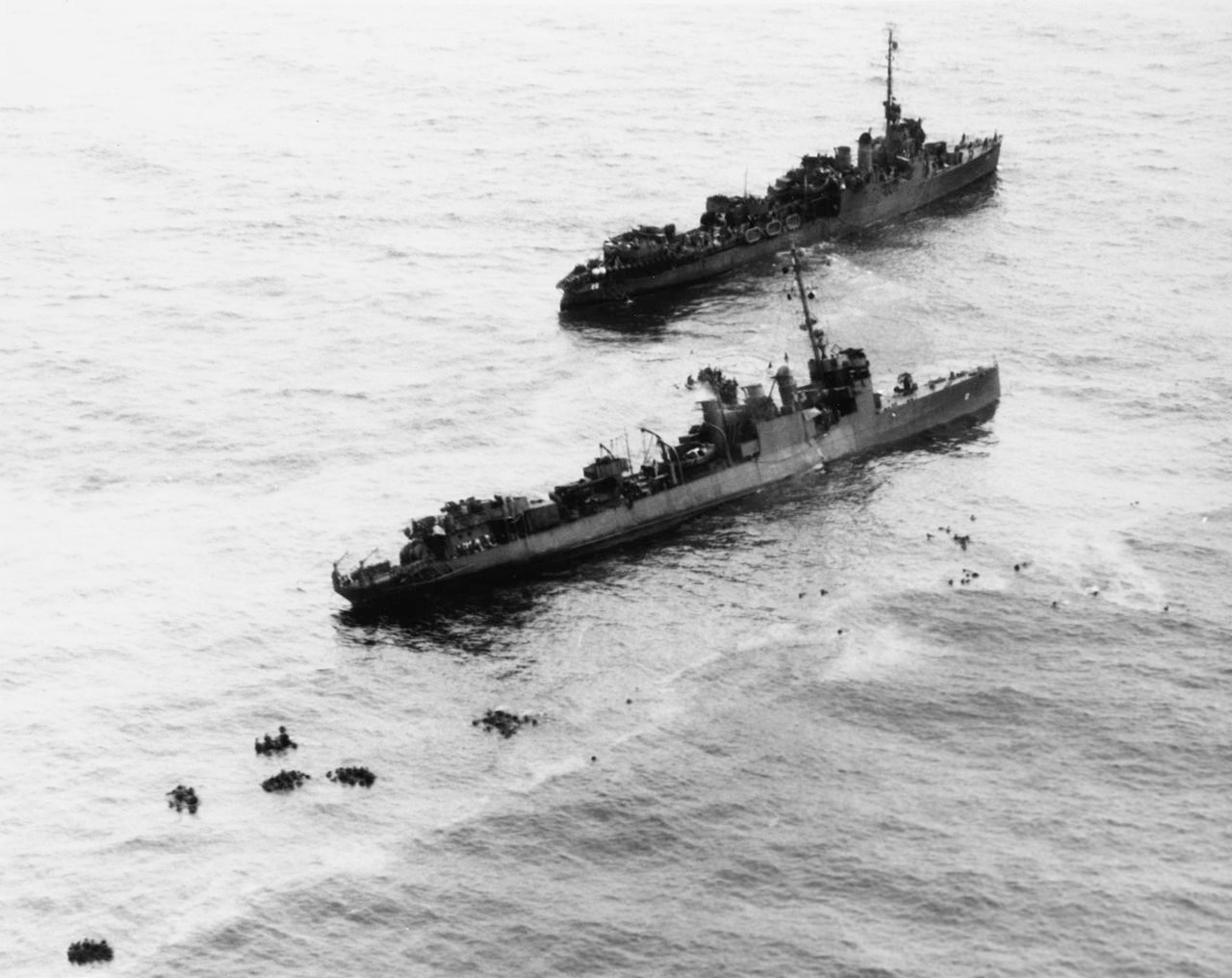 The USS Perry (DD-340/DMS-17) was a Clemson-class destroyer in the United States Navy during WWII and the ship was involved in various operations including escorting USS Arizona into Pearl Harbour before the infamous attack. She claimed a number of shot-down Japanese aircraft during the attack. After the Pearl Harbour attack, she served in the Pacific operating mainly as a mine sweeper ending her career when she struck a mine in 1944 near Angaur Island - Palau. 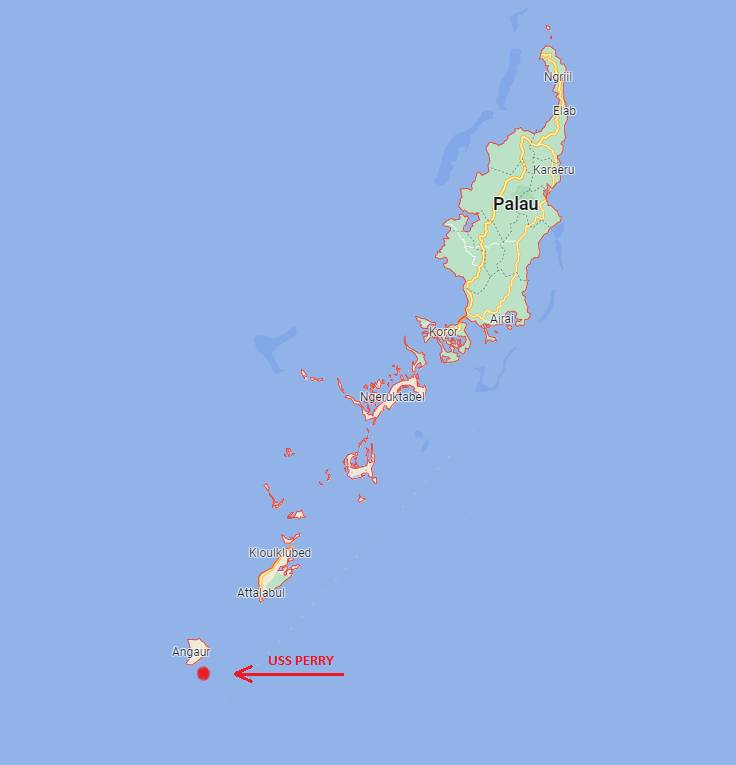 The wreck was discovered in 2000 and lies on the southeastern tip of Angaur Island in 78m of water and was featured in one episode of the Deep Sea Detectives TV show. To our knowledge, the wreck was dived by less than 30 people at the time which made it even more special.

This area is known for its harsh sea conditions, particularly very strong currents which make the potential to dive it quite limited. The last story we heard was that the divers were picked up 15km away from the wreck site after finishing their drift deco. 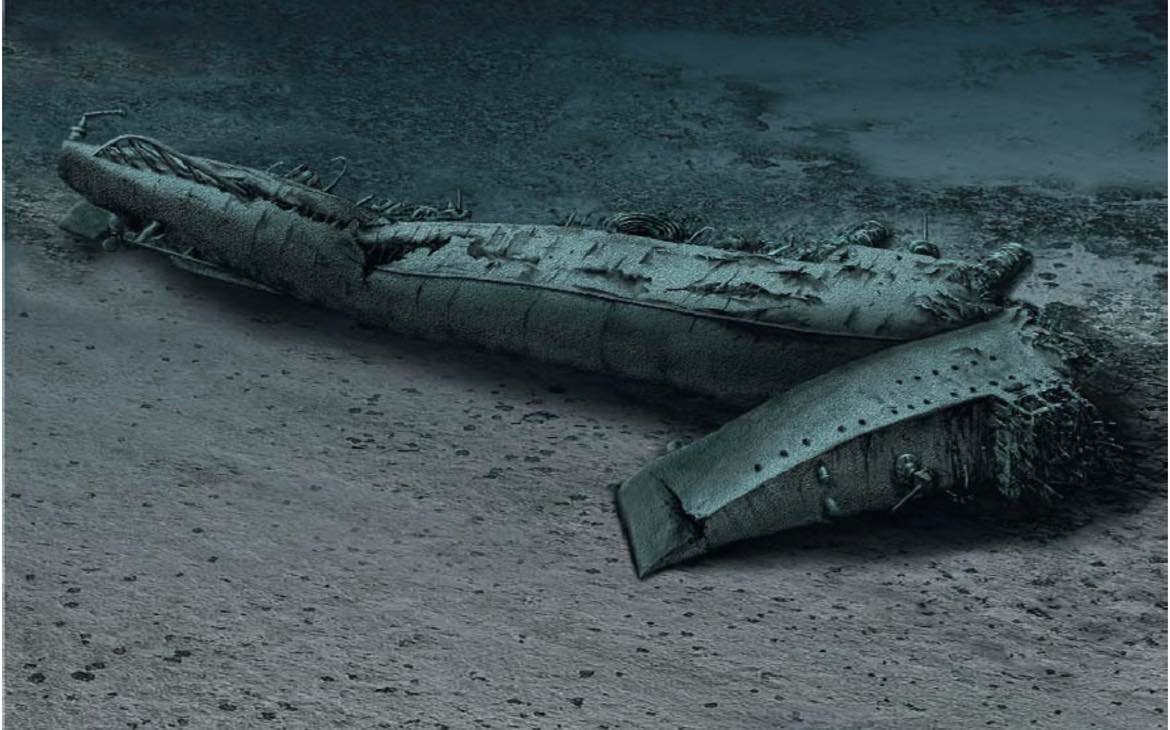 August 2022 marked 100 years since the ship was commissioned, so it was a good time to attempt to dive the wreck.

The wreck location is about 1,5 hr by a speedboat from Koror island heading south. When we got to the location the current was considered too strong to dive even though the local guys said that it was way weaker than what it usually is. You don't want to get blown off the wreck by the current as the next stop would be Indonesia.

Due to this, there were strict safety conditions put in place such as another chase boat with safety divers, a safety plane on standby and a cut-off time for a dive at 2 PM as the plane search is limited at night. Dive permits were also obtained to dive the wreck and our dive plan was carefully planned before the dive. 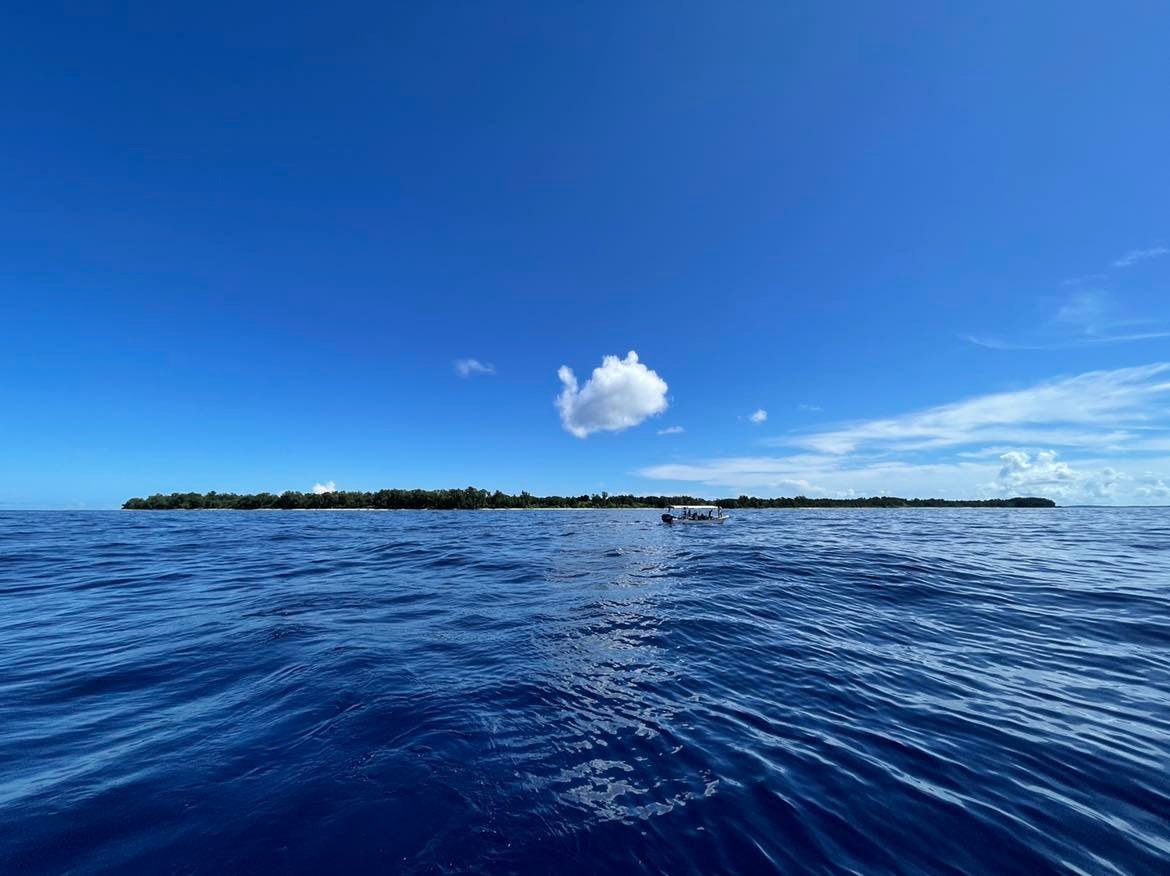 This was the 3rd and last ONLY date which looked suitable after previous weather forecasts scrapped the plans (most of us were on the plane the next day). We all decided to give it a go. Screw relaxing on the beach.

As the conditions are very unpredictable, there was a decent chance that we will spend a day on the boat staring at the blue water and then returning our full cylinders with TMX back to the dive centre at the end of the day. But we all decided to take the risk.

Testing the strength of the current just in my mask and fins resulted in me zipping by our boat in a manner which didn't feel right to attempt in full gear. Before this, we ended up finding the shot line that was used a week earlier to try to shoot the wreck with 100m of line and totally crushed float buoys.

Apparently, after shooting the wreck the line dragged the buoy below the water, and it all disappeared. Definitely a current not worth messing with. We decided to wait it out. After about an hour of the current not slacking off, I decided to take a nap inspired by Antti until I got woken up by: "Wake up!!! Wake up, get your breather on Jakub, we are going!!!"

Our team got ready and started the long pull on the shot, down to the bottom. At about 50m you could start to see the bottom in stellar visibility but no wreck, thinking „Yeah, they missed it".

When on the bottom in the distance we could see something that appeared like a wall. We headed towards it and the USS Perry started shaping up. The following time was just a blast of exploring with our dive team. The ship broke where she struck the mine and now lies in an "L" shape. When she sank, she dragged another mine down with her which now lies half-buried in the sand near the wreck. The wreck is nicely preserved and extremely interesting to explore. After 25 min of our bottom time, we followed our plan and after taking a stylish selfie began our ascend. 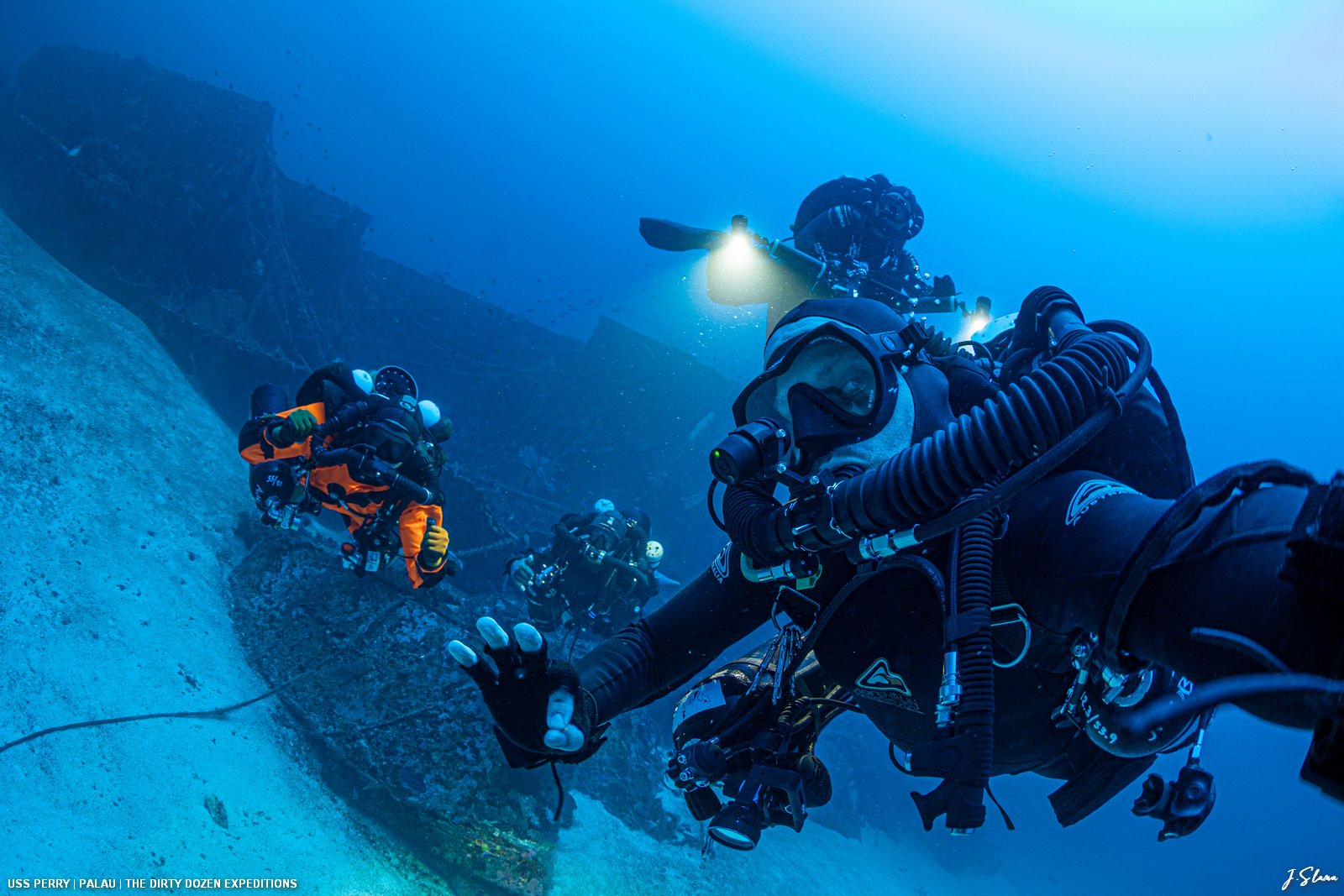 This dive was a highlight of the 2-week diving trip with great friends on a very unique site in lucky conditions and ended up being one definitely of the most memorable dives I have ever done. Could not ask for more apart from having more dives like this. 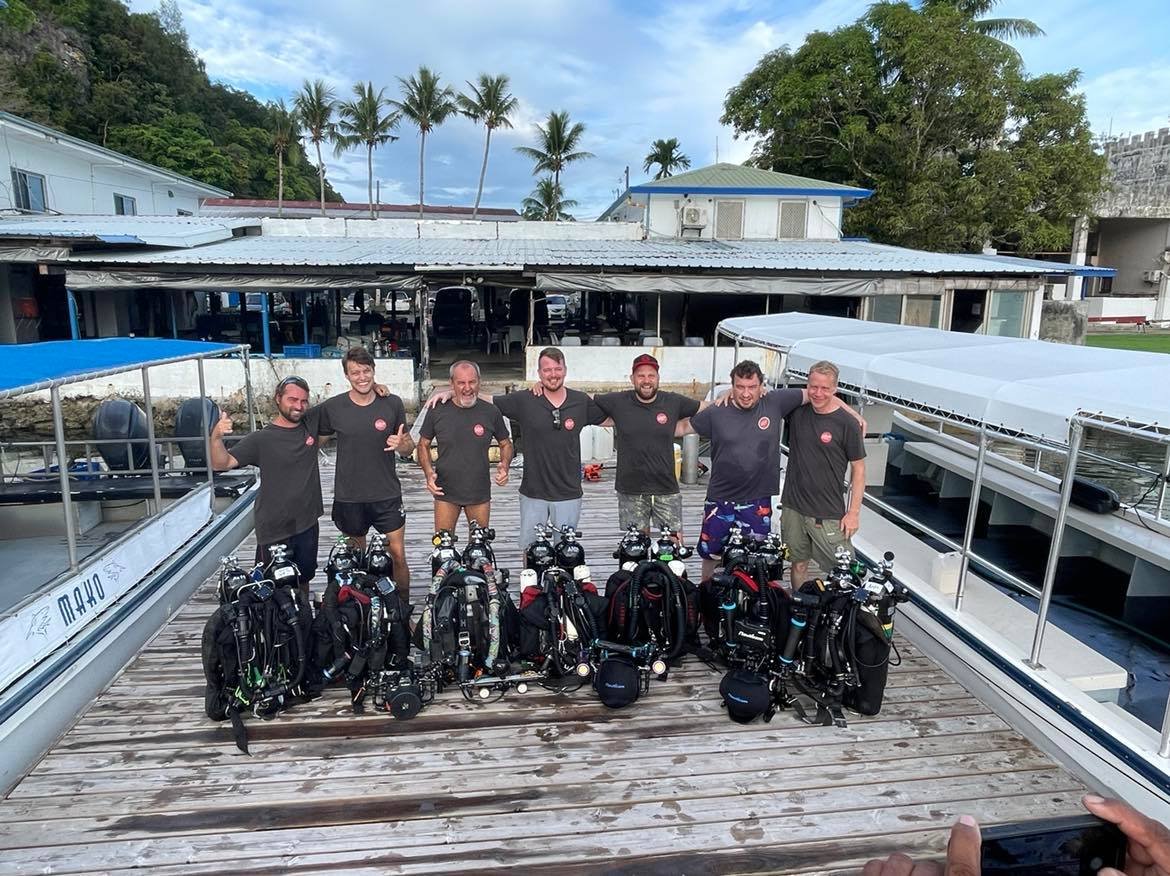 Come and join us in 2024 for CCR Liberty Bikini Atoll Expedition with the Dirty Dozen Expeditions. 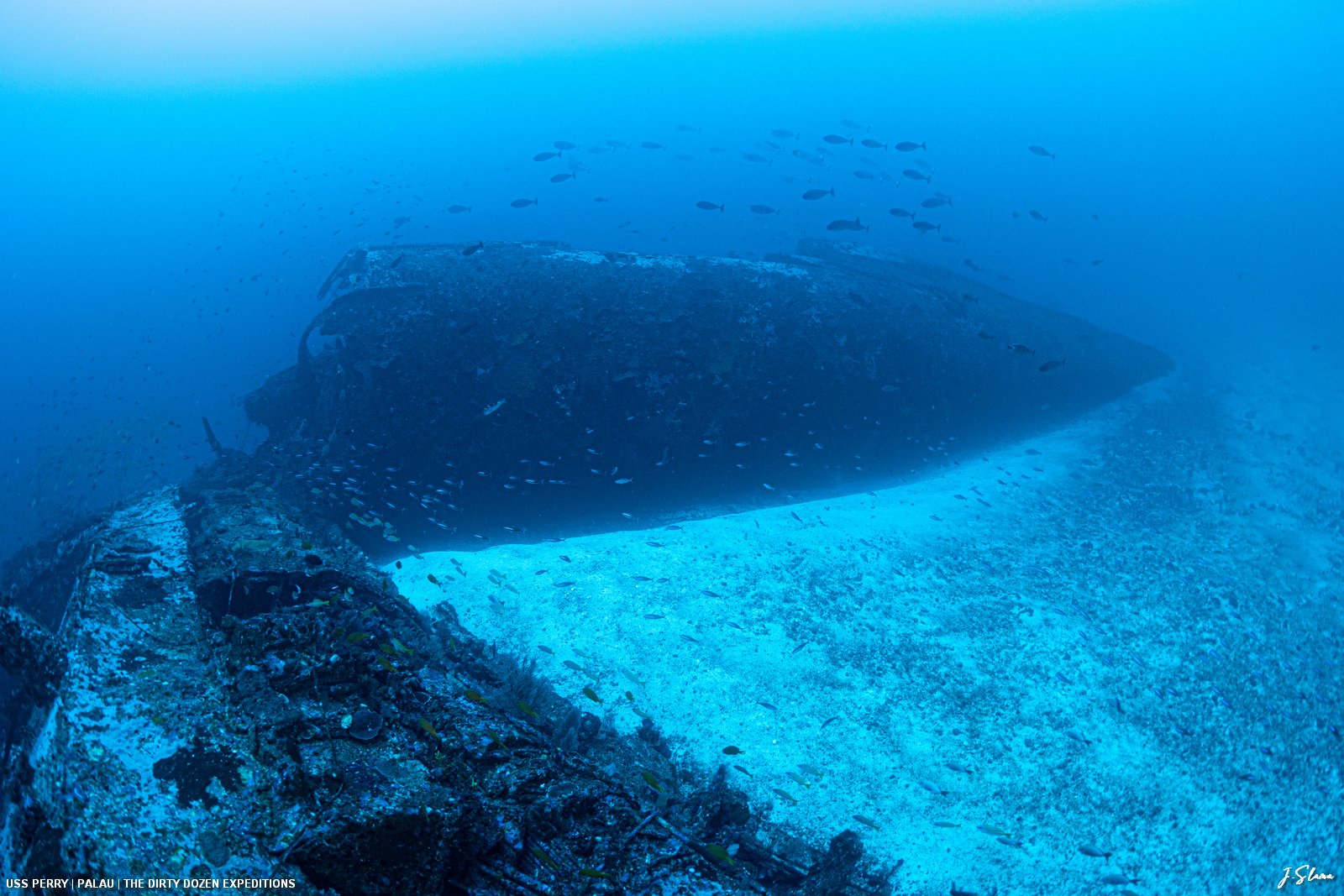 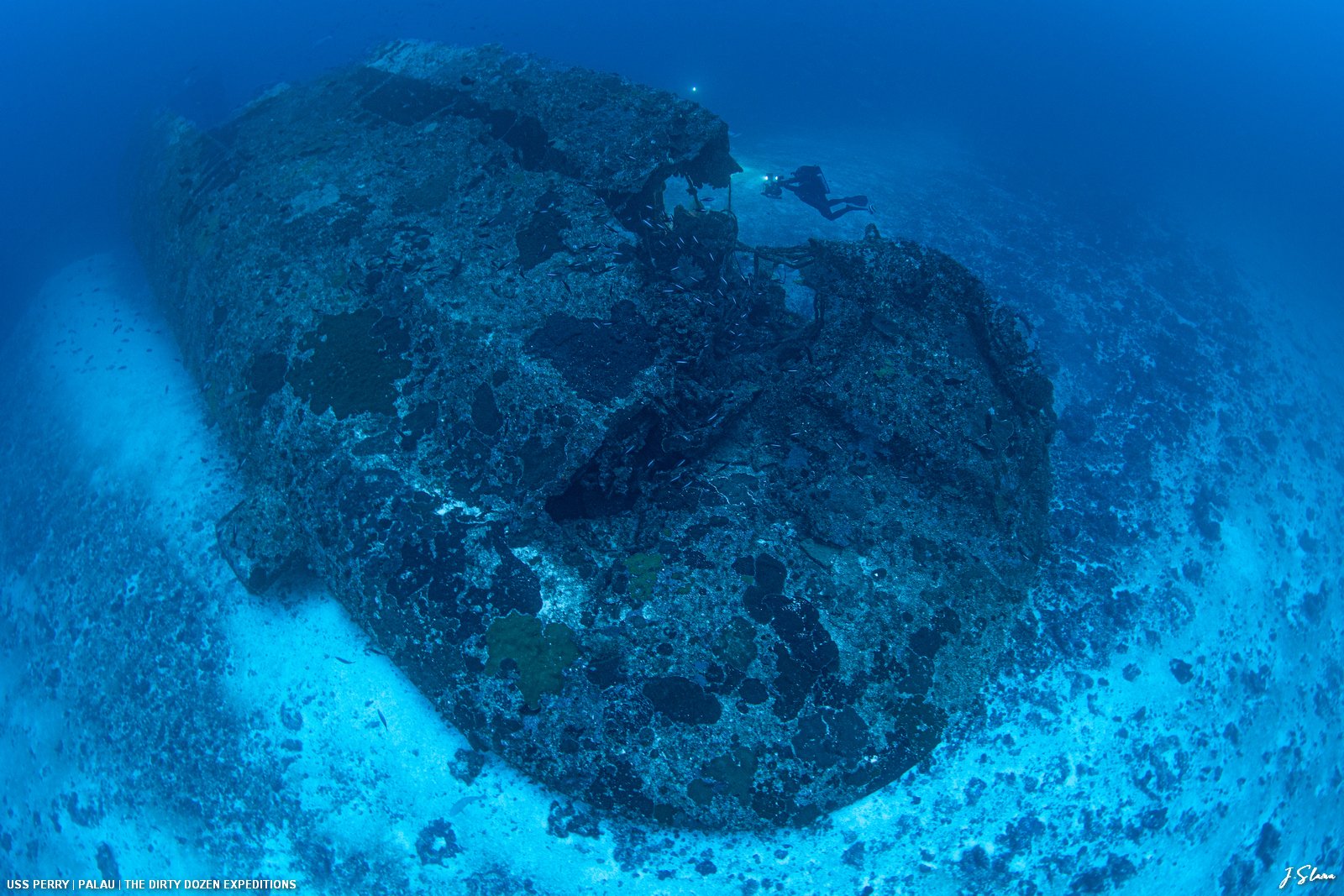 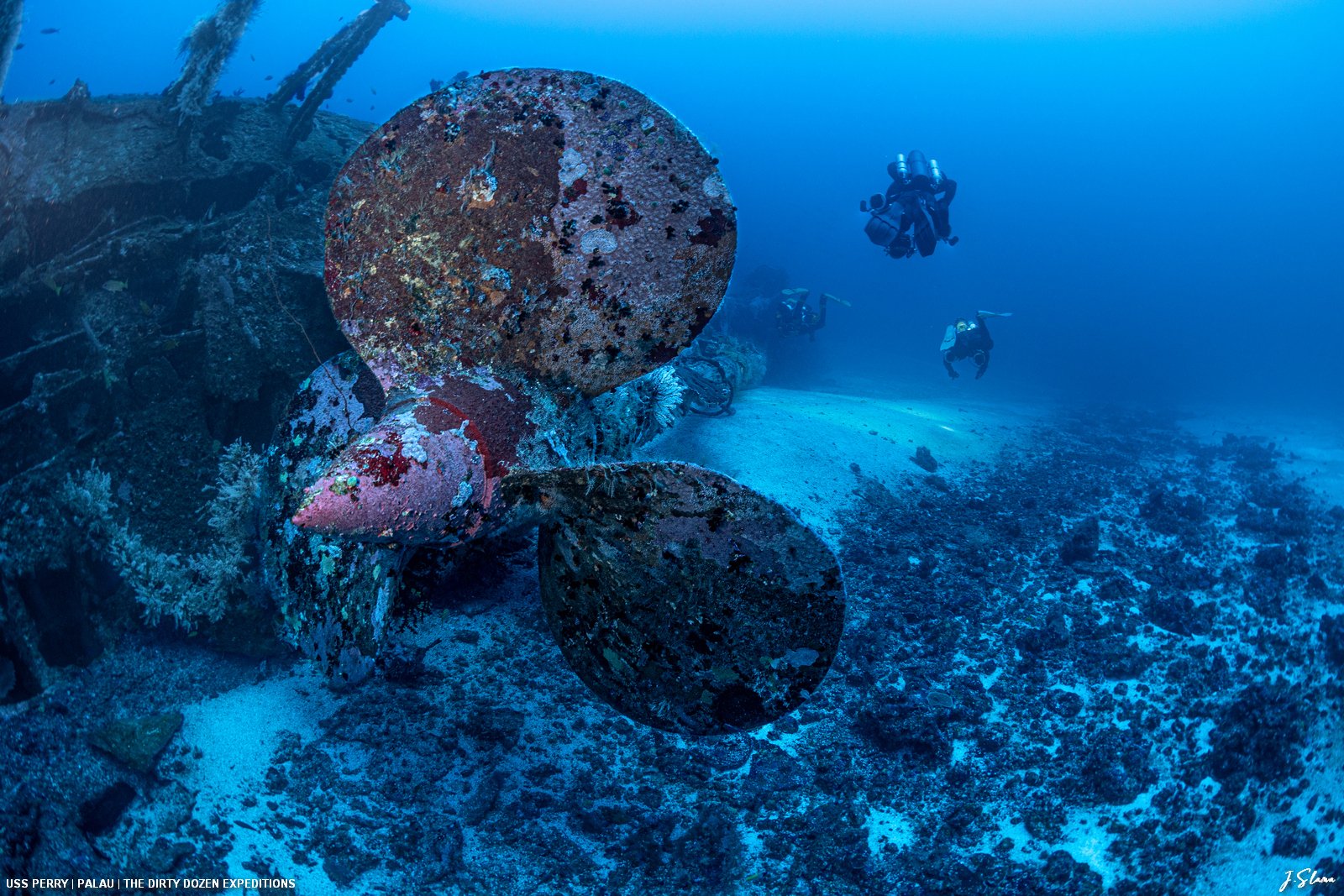 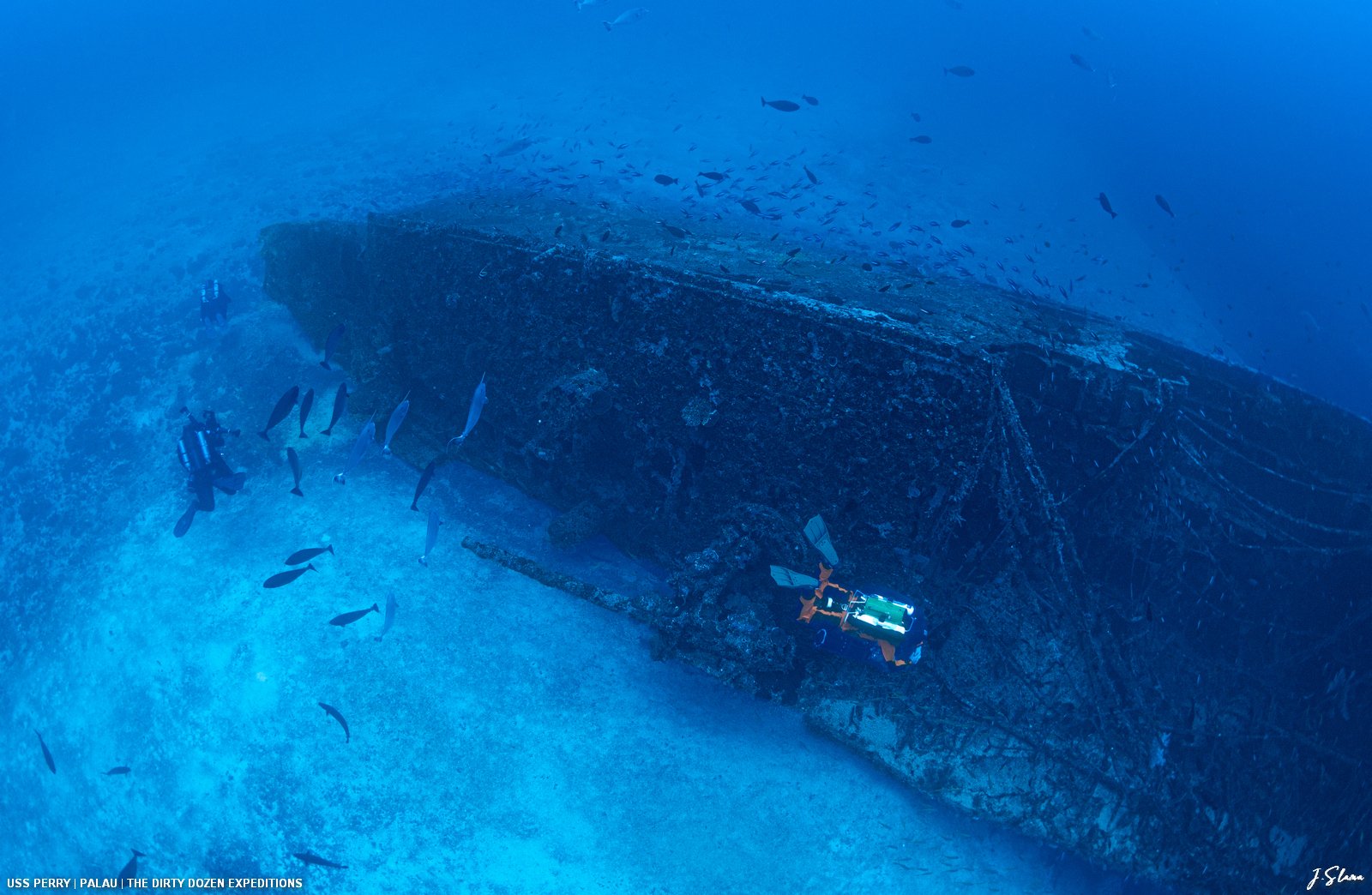 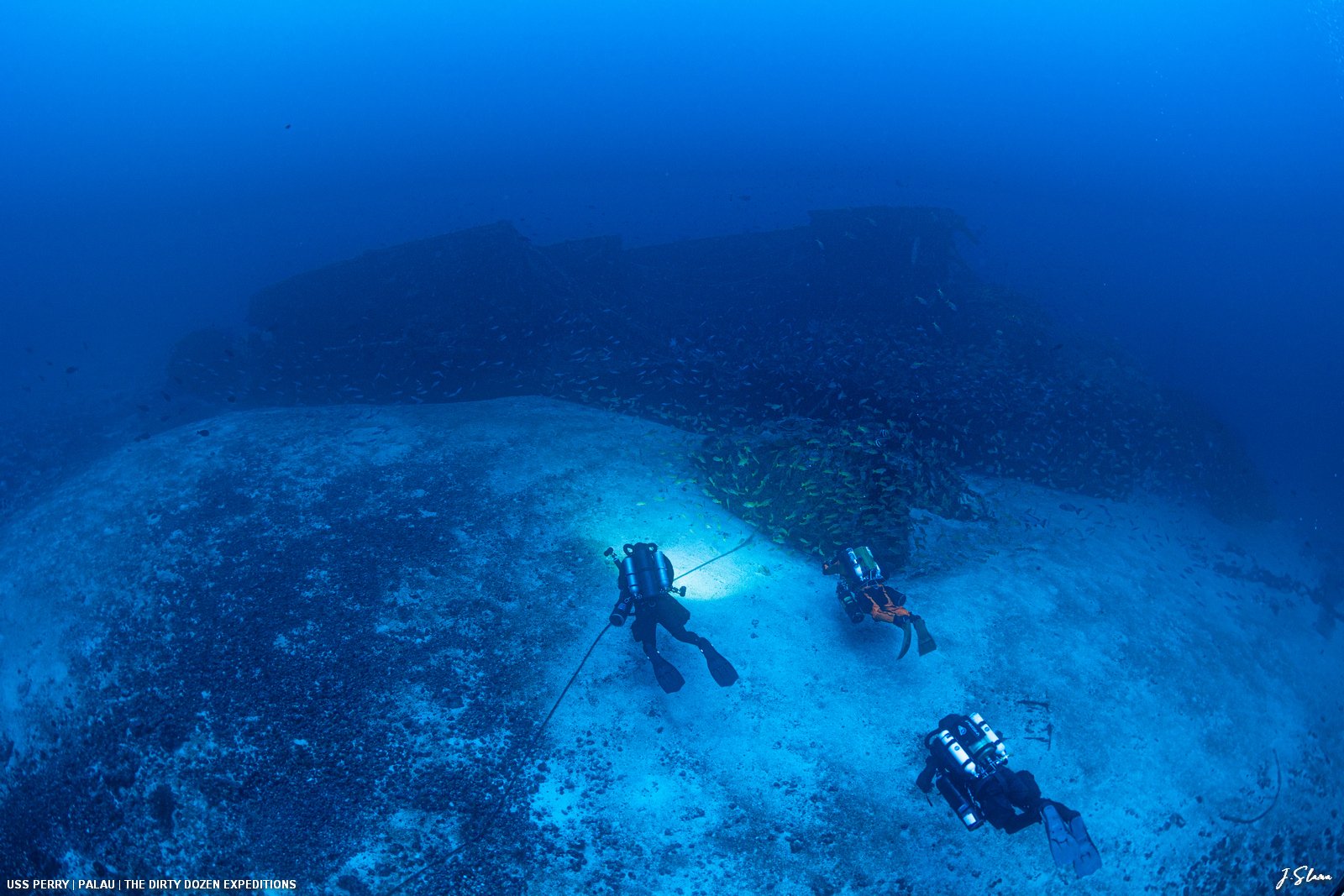